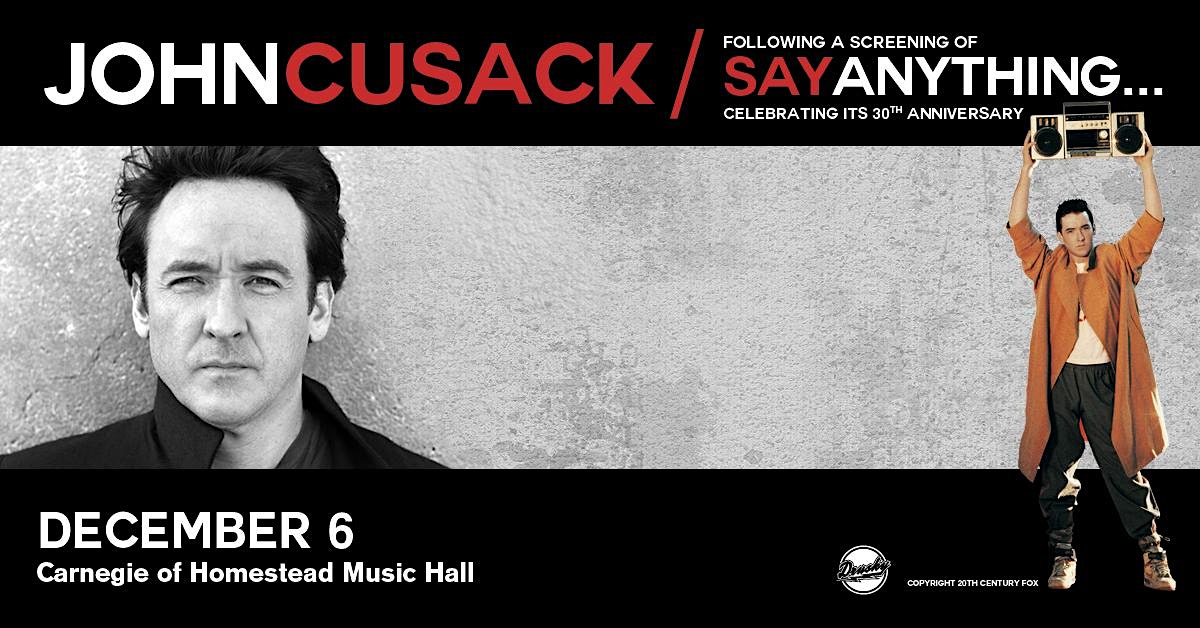 John Cusack Live plus a screening of Say Anything

In light of the COVID-19 outbreak, for the safety and health of the Carnegie of Homestead Music Hall’s patrons and John Cusack’s fans, management and artist have agreed to reschedule his upcoming engagement to December 6th, 2020 Thank you for understanding and we apologize for any inconvenience this may cause you.

A Live Conversation with John Cusack

following a screening of Say Anything

The 1989 comedy/drama “Say Anything” brought popular culture the love story of Lloyd Dobler (actor John Cusack) and Diane Court (actress Ione Skye). An eternal optimist seeks the heart of a “brain trapped in the body of a game show hostess.” Ranked by Entertainment Weekly as one of the greatest modern movie romances (and #11 on the list of 50 best high-school movies), “Say Anything” made a star out of John Cusack who went on to success in multiple films including “High Fidelity,” “Grosse Point Blank,” and “Being John Malkovich,” among others.

Now, join John Cusack for a screening of “Say Anything” followed by a LIVE conversation regarding his career and the making of “Say Anything.” Roger Ebert called the movie “one of the best films of the year” when it was released. Fans will now get the opportunity to experience a moderated discussion, with John answering audience questions as well. A limited number of VIP gold circle seats will be available that include a post-show photo op with John.

With an impressive body of work spanning the course of two decades, John Cusack has evolved into one of Hollywood’s most accomplished and respected actors of his generation, garnering both critical acclaim as well as prestigious accolades for his dramatic and comedic roles. In April 2012, the Hollywood Chamber of Commerce presented Cusack with the 2,469th Hollywood Walk of Fame star, honoring his long, ground-breaking career in film.

Cusack first gained the attention of audiences by starring in a number of 1980s film classics such as “The Sure Thing,” “Say Anything” and “Sixteen Candles.” Following these roles, Cusack successfully shed his teen-heartthrob image by demonstrating his ability to expand his film repertoire by starring in a wide range of dramas, thrillers and comedies including “The Grifters,” “Eight Men Out,” “Being John Malkovich,” “High Fidelity” and “Grosse Pointe Blank.”

More recently, Cusack starred in the Spike Lee directed drama, “Chi-Raq,” alongside Teyonah Parris, Nick Cannon and Samuel L. Jackson. The film, a modern-day take on the ancient Greek play “Lysistrata,” is centered around the growing gun-violence in Chicago and was released by Amazon Studios in December 2015. Cusack also recently starred in Bill Pohland’s “Love and Mercy,” in which he plays iconic Beach Boys songwriter and musician Brian Wilson. Cusack stars opposite Paul Dano, Elizabeth Banks and Paul Giamatti as Wilson in the later years of his life. The film premiered at the 2014 Toronto International Film Festival and was released in June 2015. Cusack also starred in David Cronenberg’s latest film, “Maps to the Stars” alongside Julianne Moore, Robert Pattinson and Mia Wasikowska, which premiered at the 2014 Cannes Film Festival.

In 2012, Cusack appeared in Lee Daniels’ drama, “The Paperboy,” opposite Nicole Kidman, Zac Efron and Matthew McConaughey as Hillary Van Wetter, an inmate on death row. “The Paperboy” debuted at the Cannes Film Festival in May 2012. Cusack also starred in the independent thriller “The Raven,” where he portrayed the infamous author, Edgar Allen Poe.

Additionally, in 2009 he starred in Roland Emmerich’s apocalyptic thriller, “2012.” Released by Sony Pictures, the international blockbuster went on to gross more than $766 million worldwide.

In 2001, Cusack was nominated for a Golden Globe Award for Best Performance by an Actor in a Motion Picture – Comedy or Musical for his role in the feature version of Nick Hornby's English novel, "High Fidelity," for Touchstone Pictures. In addition to starring in the film, Cusack also co-produced and co-wrote the script with Steve Pink and D.V. DeVincentis. The film also stars Jack Black, Lisa Bonet, Catherine Zeta-Jones and Joan Cusack.

In 1999, Cusack starred in the dark comedy "Being John Malkovich" for USA Films. Cusack’s performance earned him an Independent Spirit Award nomination in the category of Best Actor.

Cusack divides his time between Los Angeles and Chicago.